Home of the Accounting & Tax Academy as seen on YouTube 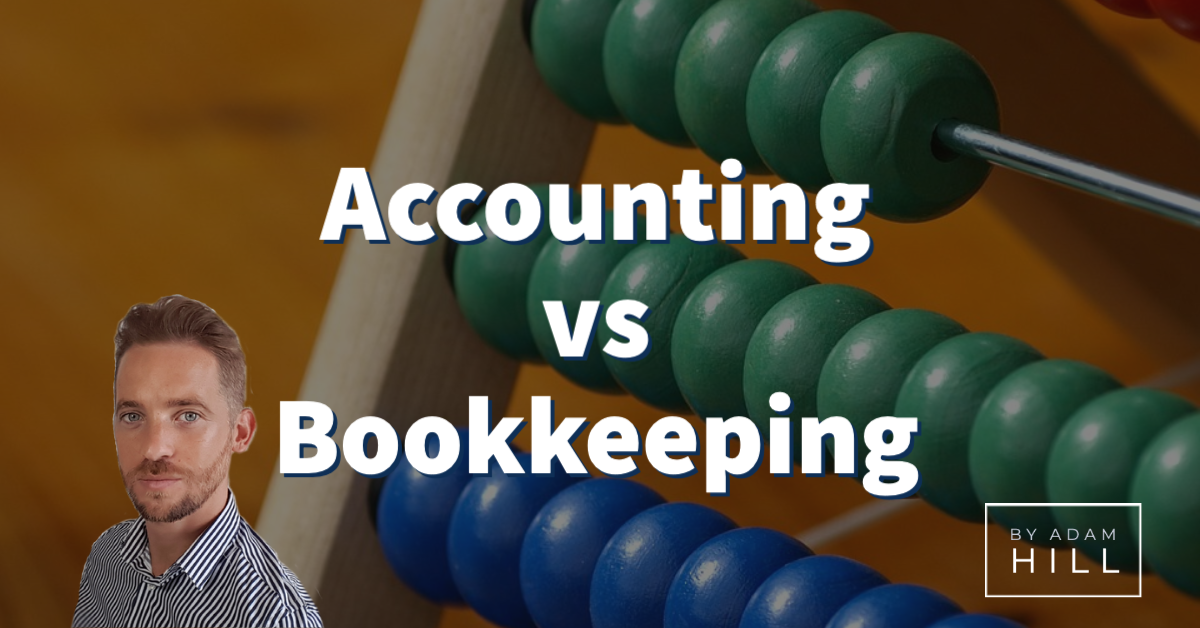 In recent times with the introduction of more technology the 2 functions have started to blur somewhat but traditionally each had clearly defined responsibilities. In this article we will look at the difference between bookkeeping and accounting.

Bookkeeping is the process by which a company records it’s income and expenditure in an organised format. The person who undertakes this role is known as a bookkeeper.

Before computers and software advancements simplified the process this was usually done by manually copying transaction details across from the bank statements into a “cash book” which allowed the bookkeeper to categorise the transactions by type before recording a monthly/weekly total for each income and expense type.

This process would usually be repeated for different bank accounts and any petty cash expenditure. The bookkeeping process was and sometimes still is a time consuming process which requires a methodical approach. To understand the difference between bookkeeping and accounting we also need to look at the accounting process.

Accounting is the process of taking the numbers which have already been organised by the bookkeeper and presenting them in a format that is suitable and understandable to stakeholders of the company.

This will involve a good understanding of accounting standards that determine how numbers and information needs to be presented within the accounts and will usually require the accountant to make a series of adjustments to the accounts known as “accounting entries”.

When trying to understand the need for accounting entries it is good to remember that there are a number of transactions that may not appear on the bank statements but still need to be represented in the financial statements. A few examples include:

It is also the job of the accountant to make the numbers more understandable for the end user. This is usually done by providing comparative numbers from previous periods that allow the reader to see where the business is doing well and where it is not as well as giving commentary in the form of notes that give further context. This could be along the lines of:
“Administrative expenses for the year ending 31 December 2021 have increased 15% over the prior year. This is a result of replacing small office equipment where the costs were not capitalised”
These notes give the end user a much better understanding of what’s happening in the business and assists them to interpret the base numbers.
In the UK, accountants need to consider in what format HMRC require the numbers to be presented and when preparing accounts for companies they will also need to consider Companies House as well.

Ready to know your numbers?

Get access to exclusive courses, resources & videos on our FREE membership site.

So What Is The Difference Between Bookkeeping And Accounting?

The two terms are often assumed to mean the same however this is not the case. Accounting records is a general term which refers to paperwork that support the numbers. This could refer to expense receipts, customer invoices, and bank statements as well as manual calculations prepared by bookkeepers and accountants.

The financial statements (often referred to as accounts) are the result of compiling all of the numbers from the accounting records and presenting them in a digestible format.

The introduction of powerful accounting software has somewhat blurred the lines between bookkeeping and accounting and really helped to streamline the data entry process.

Some newer software will use AI to recognise how transactions were previously categorised and then automatically recognise future transactions of a similar type which allows bookkeeping tasks to be undertaken in a fraction of the time.

The result is that accountants often undertake bookkeeping tasks as part of the accounting process rather than having 2 separate functions meaning that in nowadays there is less of a difference between bookkeeping and accounting roles.

There are a number of guidelines that accountants must follow when preparing financial statements for use by any stakeholders. Which guidelines they must follow will depend on the type of entity being operated.

The more simple the business setup the less guidelines there are to follow. This is partially aimed at simplifying the process for small business owners but also because there are usually less parties interested in the financial statements of a small businesses when compared to those of a large business.

The accounting standards are designed to ensure comparability and consistency for those who use the financial statements. Investors for example who are comparing the results of 2 separate companies need to know that the accounts have been prepared in the same way in order to be able to make their comparison. Any divergence from the accounting standards can result in a material difference in the numbers.

Of course with smaller companies (in particular self employed individuals, partnerships and small owner managed limited companies) there are less users of the financial statements and therefore it wouldn’t be fair to make them adhere to the same standards. For this reason the accounting standards applicable are usually on a sliding scale in line with the size of the company.

Does My Business Need To Produce Accounts?

Check out our article LTD company vs sole trader.

It is important that accounting records are maintained for a sufficient period of time following the end of an accounting period to ensure that they are available when needed. This could be for internal use or in the event of an external investigation from HMRC. The amount of time you need to keep accounting records for will again depend on the type of business you operate:

Ready to know your numbers?

Get access to exclusive courses, resources & videos on our FREE membership site.

Practice based accountant with over 10 years experience, specialising in SME's, Freelancers and Personal Tax. "I take pride in proactively recognising tax planning opportunities on behalf of clients to help them operate more efficiently."

Here’s what our clients say

When most people think of an offshore company they think of shady dealings and suitcases of cash being deposited in the Cayman Islands. This is …

...do you want higher quality accounting and tax content? Stuff that can really help you save £000's in tax, legally? Head over to our Academy where you can get access to all this ...

Schedule a call with a member of our team

We believe in growth and giving back to our community. A percentage of every penny we make goes straight to our charitable partner Nishkam SWAT, serving the homeless in London

Disclaimer – all our content is for general guidance only and does not constitute formal advice. We always recommend you take professional advice.